Custom inputs are an exciting new feature in Seq 5.1. For me, anyway, there's something magical about plug-in systems and being able to extend an app in ways its creators might not have envisaged.

Seq apps are plug-ins that can read or write events to Seq's event stream. The previous post was about outputs - apps that receive events from Seq - and to complete the picture, this post discusses Seq apps that act as_inputs_.

This example is based on the Seq.Input.RabbitMQ repository. If you're keen to follow along, or just impatient to get to the details, you can jump straight over there 🙂.

Our last example was a bit synthetic. This time around, we'll look at a realistic use case for inputs: receiving events into Seq from a queueing system or message broker.

There are heaps of similar systems out there. The one used in this example is RabbitMQ. It's easy to spin up a test instance with Docker:

And comes with a nice management UI on http://localhost:15672 (guest/guest): 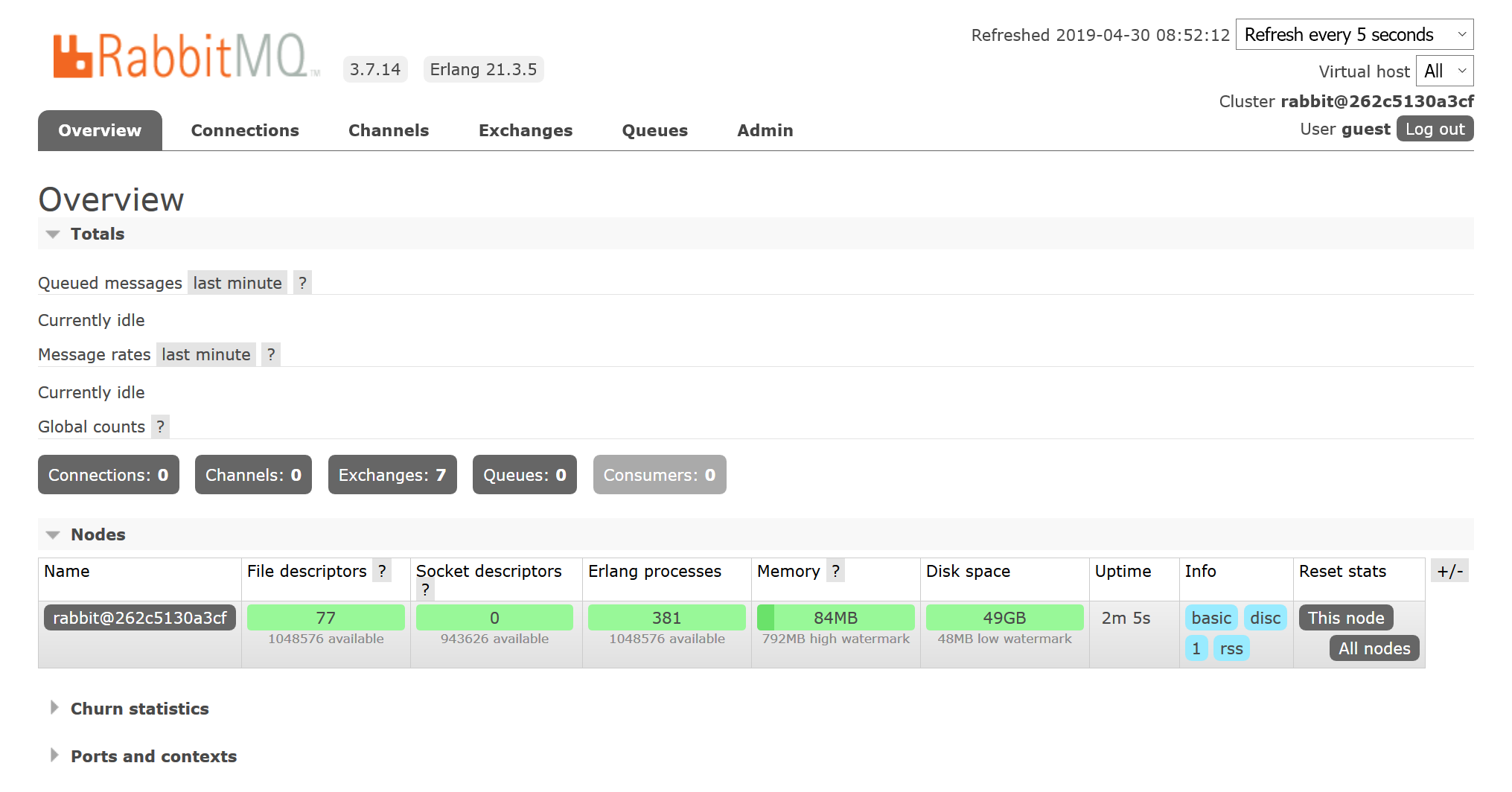 Not only that, Serilog.Sinks.RabbitMQ and Serilog.Formatting.Compact are ready-made for sending nicely-formatted JSON log events to RabbitMQ. Ideal for our current purposes!

The demo client app is a small console application.

All it does is loop and send an event to RabbitMQ each second:

If you run this and return to the RabbitMQ management console, you'll see the 'publish' rate is about right:

Nothing is subscribed to these messages yet. Our Seq input will set up a subscription and use it to pull these events into Seq's log store.

The setup for input apps is the same as for outputs; we need a netstandard2.x class library, a reference to Seq.Apps, and for this example, RabbitMQ.Client:

The Seq plug-in loader looks for a type marked with [SeqApp]. The main input type needs to be annotated with this attribute:

This will be largely familiar, if you've written or seen Seq output apps in the past.

What makes this app into an input is the IPublishJson interface. We'll have a look at its mechanics shortly, but first we'll quickly review how the app can be configured with details of the target RabbitMQ server.

These two properties supply the host and port that the RabbitMQ broker can be reached via. The [SeqAppSetting] attribute provides all of the information Seq needs to build a user interface for configuring the plug-in. The full source code listing includes several more such properties, including the username, password, queue name, and settings to control how the queue is managed.

Now the all-important IPublishJsonAsync Start() and Stop() methods, along with Dispose(). All of the action is here:

Start() is an implementation of IPublishJson. This somewhat crazy-looking method constructs the RabbitMQListener that will read byte[] messages from RabbitMQ and publish them as JSON through inputWriter.

The Receive() local function plays the dual role of decoding the UTF-8 JSON payloads, and synchronizing access to inputWriter using lock(sync). Although the TextWriter passed into Start() is threadsafe, the output stream needs to be well-formed JSON, and if two threads concurrently try writing to it, it's possible JSON payloads might be interleaved and therefore corrupted.

Behind the scenes, the Seq input infrastructure will handle event validation, and will batch up writes efficiently.

Stop() stops the listener, and Dispose() disposes it. No surprises there 😁.

Check out the full source code listing to see how this class is implemented. It's a very thin adapter over the API provided by RabbitMQ.Client.

Although Seq Apps use the NuGet package format and metadata, the package installer doesn't attempt to retrieve package dependencies, and so all binaries required by the app need to go into the package.

This is achieved by including the dotnet publish output in the package itself. In the CSPROJ file, the published binaries are included:

And the build script calls publish ahead of pack:

The app in Seq

Once the app is installed and configured via the Seq user interface, Seq will start receiving events from the queue:

You can learn more about Seq custom inputs, and see more inputs implemented, at:

Until next time, happy (custom) logging!

Seq maintenanance release 5.1.3093 is now available from the Seq downloads page and on Docker Hub. This…

Seq Apps are plug-ins that read or write events to the Seq event stream. Seq apps have been around…